Our Road Team Helps To Drive Our Tours 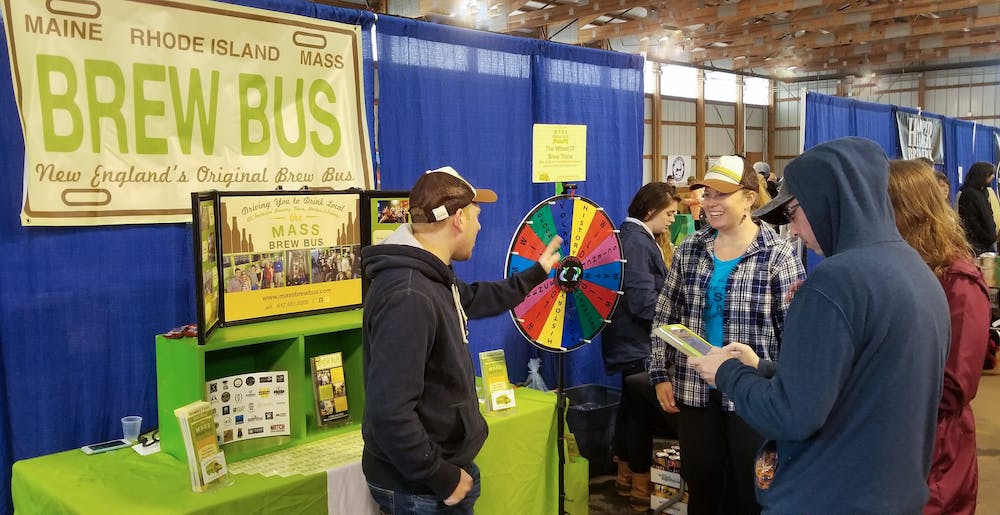 Our company attends over 30 beer festivals and other events around much of New England to actively promote our tour operations in Portland, Boston, and Providence. Learn more about the activities of our festival and event Road Team members, and how you can join them.

If you attended any of these events this year, you might have seen us in Maine (15 different events), Massachusetts (8 events), Rhode Island (6 events), or New Hampshire (2 events).

Harley Jones at the Black Fly Brewfest in Houlton, ME. May 2017

The festival “season” runs from late January through late October—primarily on Saturdays—and helps to get our company and offerings in front of many people at one time.

We do not generally bring our buses or our guests to these festivals and events. Our buses stay at home working tours while our people are at the event promoting future tours.

It’s our version of a trade show, where our vendor display table is set up at a place where beer lovers have traveled to gather to learn about and sample many different types of products.

We use the opportunity to talk directly to people who have a “thirst” to learn more about craft alcohol producers and the people behind them.

We bring two or three people to work at the table, many times the people working the festivals work for us just in that specific role that we call the Road Team.

These events are fun for sure, but our Road Team folks that are there working hard to talk to as many people as possible in a short duration of time.

The time that is spent at our table is often a nice break from the constant sampling of alcohol that happens during the rest of the event.

Our Road Team gathers contact information from interested attendees so that we can send details about our offerings, along with a discount code that can be used to save money on a future tour.

Since we do not have beer samples at our table, we use a tried and true method to have the attendees come to learn more about our tours. It’s called The Wheel of Brew Trivia.

The colorful, spinning wheel often catches the eye of attendees and allows them to come closer to find out more. After a spin to determine a category, the Road Team member will ask a beer-related trivia question.

Here is an example:

Which world city hosts the original, and still the largest Oktoberfest celebrations?
(The answer is Munich, Germany)

Once we have guided the guest to the right answer, we then use our educational focus to explain in a little bit more detail to anyone who is listening.

What we now know as Oktoberfest began in 1810 as a town party after a German Royal Wedding when Crown Prince Ludwig (later to serve as King Ludwig I) married Princess Therese. Although it didn’t really start as a beer-focused party, over the years it has grown into the world’s largest festival. There are specific rules for serving beer at the event, it must conform to the Reinheitsgebot, and it must be brewed within the city limits before it can be served at the Munich Oktoberfest.

This year (according to the official recap), Oktoberfest attracted an estimated 6.3 million visitors for the 185th edition that ran between September 22nd and October 7th, 2018. Those attendees drank an estimated 7.5 million liters of beer, tried to steal over 100,000 mugs (that were confiscated at the exits), and they also lost 2.685 items while on the festival grounds this year. These items were mostly passports, wallets, articles of clothing, phones, keys, pairs of glasses, pieces of jewelry, bags and packs, umbrellas, and cameras. But the attendees also lost a matching set of one couple’s wedding rings, a brochure display stand, a dog leash, and a laptop.

We can always use more people to help us in this capacity. If you or someone you know is interested in learning more, visit our employment pages for Rhode Island, Massachusetts, or Maine.

See you at the next beer festival!

Don Littlefield is the General Manager of Brew Bus Tours. He estimates he has attended over 300 beer festivals since he was of legal drinking age, but none of them were the Munich Oktoberfest. Twitter: @BeerinME