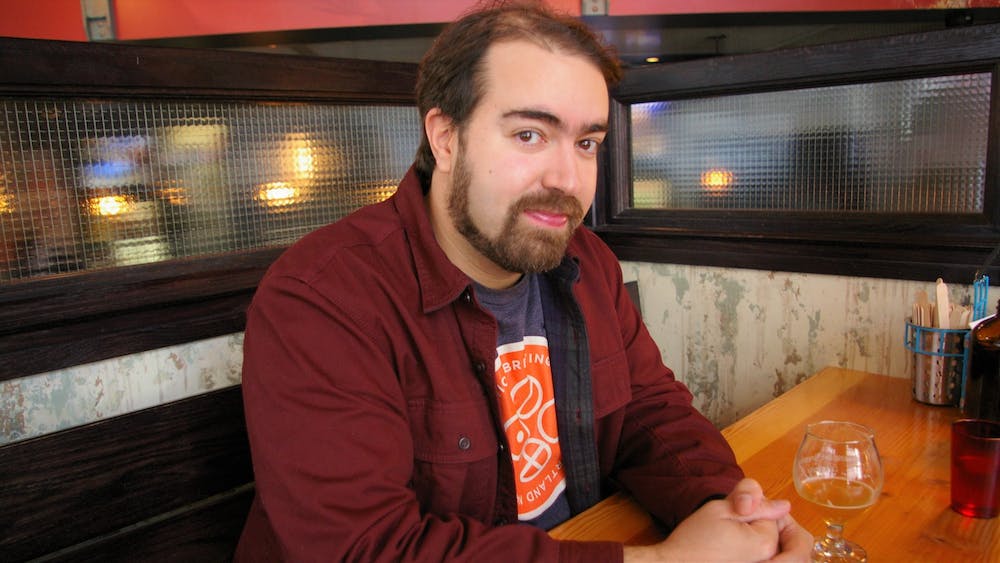 The next profile in our series features our Group Sales Coordinator, Greg. Learn more about the interesting path that led to him joining Team Brew Bus.

Greg Klein joined the Brew Bus in May 2017 and began driving, guiding and fine-tuning his craft alcohol knowledge helping to give our guests an unforgettable experience in Beercationland.

Greg spent the first part of his life in Brooklyn (where he was born), Manhattan, and New Jersey. After a dozen years there, the Klein’s moved to Brunswick, ME. Throughout high school and college, Greg found himself continuously gravitating towards the theater and entertainment world.

When Greg is not on the bus he enjoys volunteering at the Wiscasset, Waterville and Farmington Railway and learning about all there is about space with a little help from his idols Neil deGrasse Tyson and Carl Sagan.

Greg’s extensive experience in the entertainment industry includes working as a sound apprentice at Maine State Music Theater and as an assistant stage manager at the Bowdoin International Music Festival. He studied theater at Johnson State University (VT), University of Maine Orono (ME) and the University of Southern Maine (ME). Greg also worked as an account manager at High Output, a production equipment company focusing on renting and setting up equipment for shows, events, and film crews.

With Greg’s theater background, love for “just straight up driving”, and of course craft beer, he knew the Brew Bus would be the place for him.

In December of 2017, Greg accepted the position of Group Sales Coordinator for The Maine Brew Bus.

Now, along with driving and guiding he is your very own Brew Bus consultant for any group events that you are planning in Portland, Maine.

What is your favorite playtime activity or hobby?  I like volunteering for the Wiscasset, Waterville, and Farmington (WWF) Railway and building railroads. Also, I enjoy camping, woodworking, and cast iron cooking specifically outdoors on a fire.

What is the best part of being a driver/guide? As simple as this might sound, I just like driving. I really enjoy it and all the people you get to meet.

What has been your favorite experience with a guest? Meeting a guest on the bus that knew a lot of my family and friends from Brunswick. She also lived on a street named after one of my cousins.

Favorite Snack? Cheese It Waves or Cocktail Shrimp, I could eat those all day.

What is your favorite movie? The Blues Brothers or any of the Studio Ghibli Films

Who is your celeb crush? Man-date with Justin Timberlake. In general though, Carl Sagan and Neil deGrasse Tyson. But also George Clooney. They would have to fight over me.

What is your favorite food? Sushi

What is your favorite band or music/genre? I’d say Tesseract. They are metal/prog sort of stuff.

If you could describe yourself as a local craft alcohol producer or beverage what would you be? Barreled Souls. I like making things out of wood so I would love to live inside of something made out of wood, like a barrel. I like cooking and putting all kinds of weird stuff together to see what will happen. Barreled Souls combines crazy things like marshmallows, donuts, hot peppers and more into their beers and I think that’s great.

There’s a part of Brunswick, Maine where all the street signs in the neighborhood are named after Greg’s cousins. His mother was 1 of 10 kids.  “Oh-J from Lone Pine is my cocktail shrimp.”