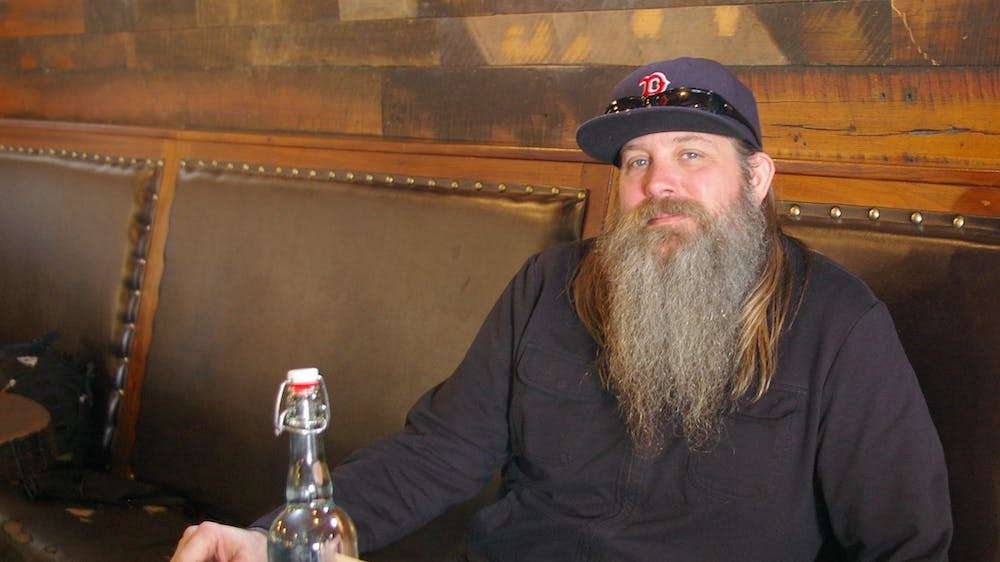 It’s time to learn more about Pepper, or Tito, or Snuggles, or whatever name this particular driver and guide is calling himself today. Check out the next staff profile in our series – all about Andy.

Born and raised in Holliston Massachusetts, Andy Scherer started working for the Maine Brew Bus in 2015 right after he enjoyed a tour on the bus as a guest.

At the time, Andy had already been driving party busses and limousines. Since we really loved the tour he was on, he asked his Brew Bus driver that day if they were hiring… and the rest is history.

Andy moved to Maine in 2003 after spending a summer helping run his family friend’s campground in Poland, Maine called The Hemlocks.

Growing up in a restaurant family, Andy explained that has been in the business of food and hospitality his entire life starting off as a dishwasher for his parents when he was 10 years old.

Andy has had a number of different jobs including stints at Sunday River, Papoose Pond, Admiral’s Inn in Ogunquit and the Yachtsman Hotel and Marina Club in Kennebunkport.

After spending time in the mountains, southern coast, and the woods of Maine for work, Andy decided to call Portland his home in 2015.

When Andy is not on the bus, he works for Our Tickets and Tours driving larger parties to music or sporting events and special occasions. He also spends a fair amount of time in Ellsworth, Maine, and you may occasionally find him serving beers at Airline Brewing Company pub or helping to make beer at Fogtown Brewing Company.

All in all there is no one better to take you around the Portland beer scene the right way.

Favorite Part of Being a Driver/Guide – Showing people a good time. When you know that you nailed it, you nailed it and that’s the best part.

Favorite Experience with a Guest – I guided a tour for a former employee’s sisters bachelorette party and I ended up getting in the official photo book for the wedding. It was a picture of me and his two sisters, that was pretty special.

Favorite Snack – Corn chips with crunchy peanut butter and sriracha. Then, if you want the deluxe, you just add a grape tomato on top. It’s great, a little szechuanny, by far my favorite snack

Animal Friends? –  My girlfriend and I share a cat. Her name is Mud. She’s looking for a job if anyone knows of one.

Favorite Food – Bloody Mary’s with the olives and maybe some shrimp or a strip of bacon in there.

Favorite Band/Music/Genre – My overall favorite is Phish, but I have a few others that I like to spend my time and money on. Ween and My Morning Jacket for example. But, I’m also a huge Yacht Rock fan, Michael McDonald and Christopher Cross. It’s just what a fool believes, ya know? I love the Dead too and just music in general.

If You Could Describe Yourself as a Local Craft Alcohol Producer or Beverage, which/what Would you Be? – I’d say that I’m Sour Trouble from Liquid Riot because you either love me or hate me, and I’m a little tart upfront but once I go down the flavor palate, you get complex and rich flavors.

Andy met President George H. W. Bush and many Secret Service agents during his time working in Kennebunkport. While he was in high school in Massachusetts, Andy played in a MIAA high school football Super Bowl that was held at Boston University.