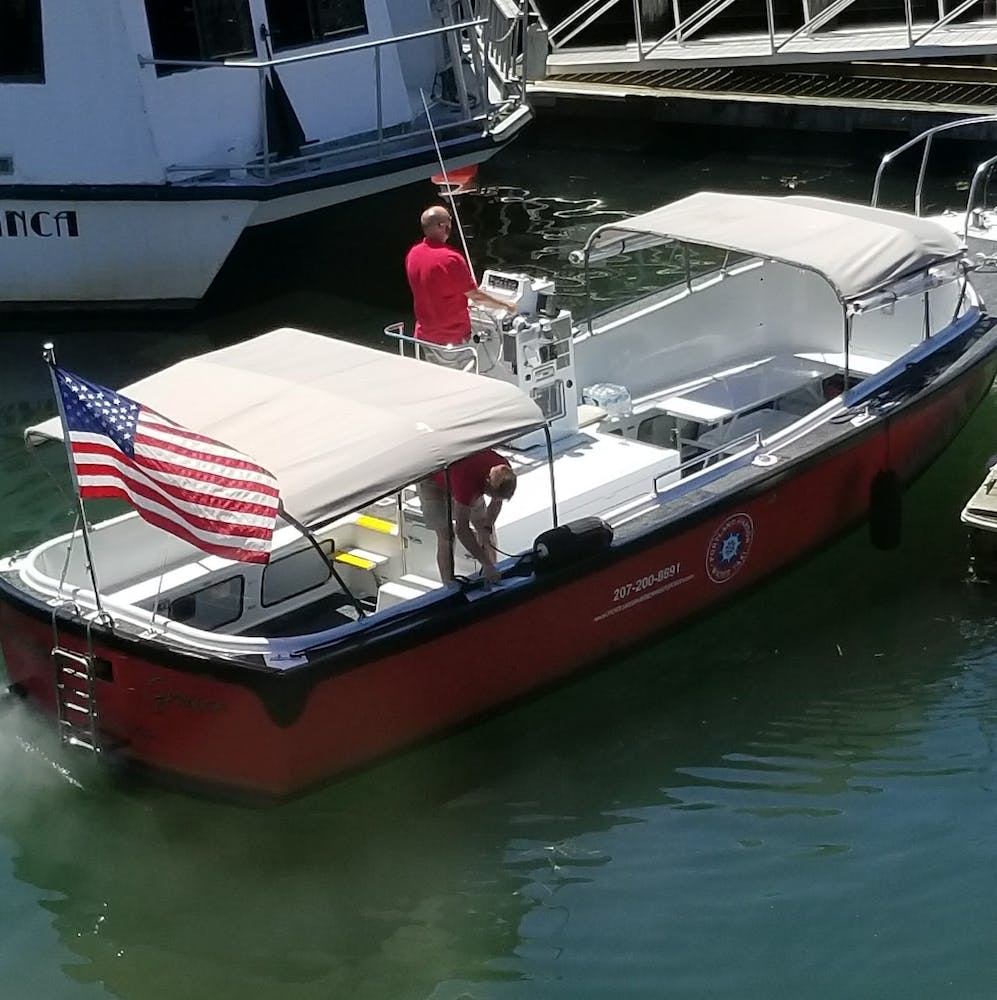 When I think of the summertime in Portland, all I can picture myself doing is hanging out on a boat somewhere, enjoying delicious local beer, and living the way life should be.

There isn’t anything much better than cruising around Casco Bay on a perfect sunny day enjoying everything the islands, cliffs, and water have to offer.

The idea to take to the water to visit local breweries is one that we had talked about for a couple of years. Once we had the concept, we just needed a name.

Some of our team were fans of the TV show from the late 1990’s called Blue’s Clues, so we twisted that name towards the beer side to call this water-based boat tour Brews Cruise.

There was only one issue…

That title is a registered trademark of Brews Cruise, Inc, a provider of premier brewery tours  Brews Cruise was founded in Asheville, NC in 2006, and now has operations that span 15 beer-loving locations across the country.

The owners of that company were recently on one of our bus tours in Portland, and we talked to them about proper use of the tour name. In the greater interest of beer tourism, our Brews Cruise tour name is now used with permission of the trademark holder.

Portland Harbor Water Tours has teamed up with Maine Beer Tours to bring you our Brews Cruise every Saturday from May through September, and enjoy our all-inclusive brewery tours on the water of Casco Bay!

Ben Graffius of Portland Harbor Water Tours originally grew up in the Bar Harbor area where his love for the water began to grow into more than just a hobby. He has been living in the Greater Portland area with his wife, two daughters, and their Golden Retriever Riley for the last 9 years.

“My family never had boats really. Unlike a lot of people where boating was a big part of their life, it wasn’t so with me. I have always been around water and enjoyed it which basically became my inspiration to pursue it more career-wise,” Graffius told me recently.

Ben attended Maine Maritime Academy in Castine where he pursued his “dream of being a captain,” he explains. But after a while, he realized he wanted to get back to what he truly enjoyed  – which was being in the water on a “smaller scale” instead of working for a bigger company.

About five years ago Ben owned a recreational tow boat franchise similar to SeaBoat. This company would help boats out if they ran into trouble. “It’s like AAA on the water,” he said.

After a while he began looking for ways to change up what he was doing. He began shuttling people around Casco Bay with a smaller boat he owned.

Ben explained, “it really set the groundwork for me to be able to do this. I developed some really good relationships, like with Rippleffect, and with other customers who themselves had a great customer base, so it made that transition really a lot easier for me.”

Finally about a two years ago, Ben was able to operate Portland Harbor Water Tours full time. But he wasn’t done with building this company, and other businesses.

Ben is the co-founder of White Cap Coffee, a premium crafted cold brew coffee company. He is involved with the folks at Rwanda Bean Coffee. Together they have opened a coffee roasting facility and retail store in South Portland, and even more recently Ben took over operations of the Black Cat Coffee Shop in Portland.

For the boat business, he acquired a 33-foot Willard last year that was built as a passenger launch for the military. He named the 37 passenger vessel The Elizabeth Grace. The larger capacity has opened up all sorts of opportunities for his boat business to expand.

“I had come up with this idea to do a harbor shuttle where we visit places like Bug Light, Saltwater Grill, Thomas Knight Park, then back to Portland. Then one day a couple of years ago at Thomas Knight park I heard about a new brewery that opened nearby called Foulmouthed Brewing. I started doing some stuff with the owners like bringing shuttles over to get growlers for a sunset cruise, things like that,” Graffius told me.

This initial connection he made with Foulmouthed Brewing really sparked his interest in getting beer tourism on the water. He quickly realized how much people would want to be on his boat, headed toward great breweries, in a gorgeous place like Casco Bay.

“I decided to stop doing as much of the shuttle to be able to open up opportunities like this with the bigger boat.” Ben explained. “I reached out to Zach and Don to work on some ideas that can connect thirsty people to breweries by getting them on the water.”

That idea has become the Brews Cruise, an offering by our sister company Maine Beer Tours. It is offered every Saturday starting May 26th with departures at 1:00 pm (returns 4:00 pm) and 2:00 pm (returns 5:00 pm)

Take a fun boat ride to visit a brewery, spin around Portland Harbor, and walk with our expert guide in the historic Old Port to visit another brewery.

“Brews Cruise” is the registered trademark of Brews Cruise, Inc, a provider of premier brewery tours around the country, and is used with permission.