The second day on our Insiders Experience: Iceland group trip with Longer Vacations brought us to many different places around the capital city of Reykjavik. We even managed to find our way into a pop-up bar filled with local beer industry people. Read about the continuing adventures of our lucky 13 travelers in today’s post.

A long and full day of first day activities in Iceland meant that we could rest in a little on day two.

At this time of year, the sun rises at about 11:00 am and sets at 3:30 pm. That only leaves less than five hours of available daylight for exploration.

On this day, our group was on their own until we all assembled just after sunset in front of the Hallgrímskirkja church, Reykjavík’s main landmark with a distinctive (and highly visible) tower.

There we met Lalli, a man who earlier this year gave up nursing to start his own tour company called Funky Iceland.

On his well-designed Funky Christmas tour, Lalli brought us on a walk around Reykjavik pointing out landmarks and historical areas, but also weaving in the traditions and myths of Christmas past and present. It turns out the Icelandic celebration of the Yule is often grim and murky. 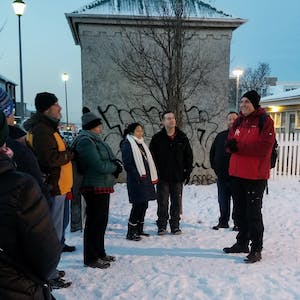 Perhaps we were not surprised to learn about elves and trolls as part of the holiday story, but we also heard about an evil Christmas cat who eats children if they are not dressed warmly enough for the winter!

Lalli finished the tour by giving us special chocolate treats at the Harpa Concert Hall, home to the Icelandic Opera. From there, we were promised a short walk to our next stop.

Well…it turned out to be considerably farther than promised. But after we arrived at Ægisgarður, we were promised that we could enjoy all the beer that we wished to have. And since there was plenty of food on hand for us, we settled in for the next couple of hours of talk and tastes.

Our host stepped us through the history of the brewery, which was named after the god of the seas, Ægir, from Norse Mythology. According to legend, he was also the best brewer in the world. 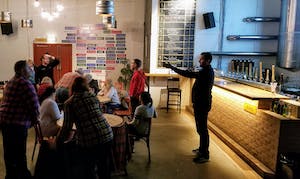 We also participated in a tasting exercise where we would work in small groups tasting a particular beer, then find six descriptive words from among two dozen on a screen to correctly identify the characteristics of the beer.

Before we left, we were told about a special event – a pop-up bar for Ægir Brewery being held back in town. Would we like to go?

The answer, of course, was yes.

Many of us went to an unnamed second floor spot and found a strong local and beer industry crowd already on hand. 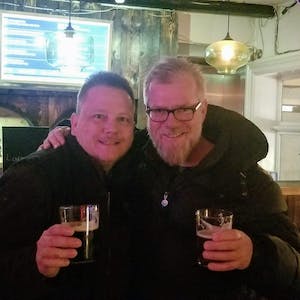 Our friend Siggi from RVK Brewing stopped by for a beer. I met the popular Snorri of Micro Bar at one of the tables, with him was Davíð who knew several people in the beer industry back in Maine.

We even also learned about Ålfur Brewery, a newer company in Iceland that uses peels and scraps from native potatoes in each batch of beer!

A great time was had with our new friends, and after a nightcap for the last call at Lebowski Bar, we headed back to rest and prepare for yet another amazing day in Iceland.

Want to join us on our next international adventure? Reserve your spot now for our next Group Trip – Insiders Experience: Ireland in March!

Don Littlefield is the General Manager of Brew Bus Tours. This is his second visit to Iceland. While watching the Northern Lights on a hill 40 miles north of Reykjavik last night, he had a wonderful Imperial Stout that our Icelandic beer expert shared from Malbygg Brewery. Twitter @BeerinME