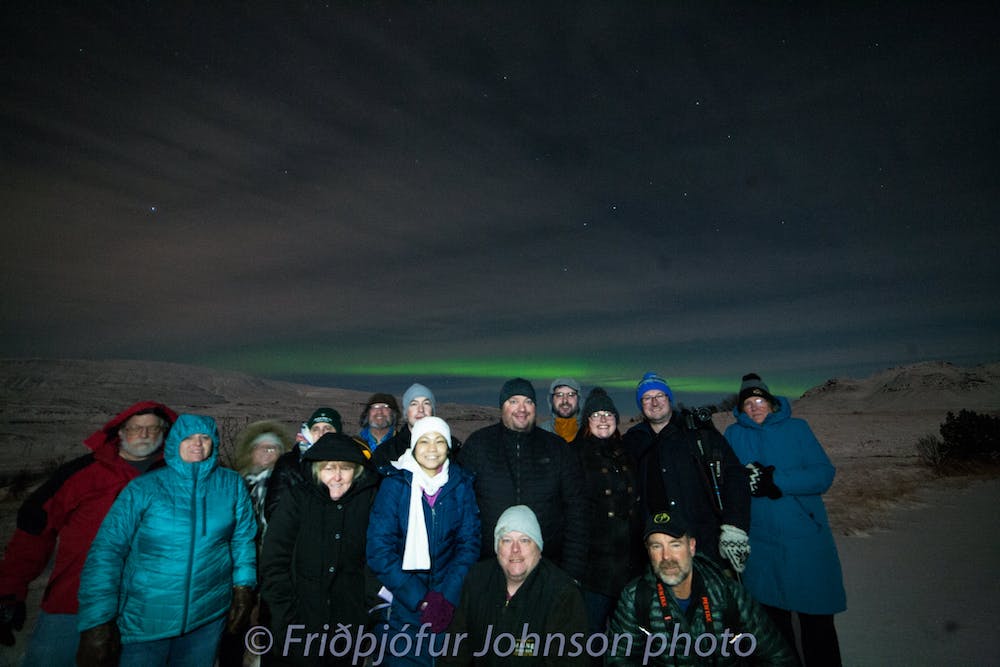 The highly anticipated third day on our Insiders Experience: Iceland group trip with Longer Vacations brought us a little bit of everything: Icelandic whisky, beer, hot dogs, and a quest to find the elusive Aurora Borealis. Our travelers had a very memorable day, learn more about it in today’s post.

Darkness gave way to light in the mid-morning, and the group set off to start the day off right – with Icelandic spirits! 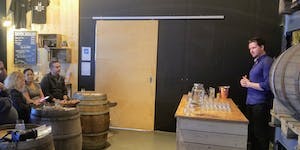 Eimverk Distillery is Iceland’s’ first and only whisky distillery, but they also make a wide variety of Icelandic Spirits. They are also the only distillery producing their spirits from 100% Icelandic barley.

Our entertaining host gave us a background on the company which was founded in 2009. After much trial and error in learning how to actually distill, they now produce several excellent spirits.

Along with a distillery tour, we tasted different samples of Vor Gin, Víti their traditional Icelandic Brennivín, and Flóki whisky.

Some were barrel rested or barrel-aged, and one whisky used malt that was smoked with sheep dung! That was a new experience for everyone.

It was time to head over to Bryggjan Brugghús for an Icelandic beer dinner. Bryggjan (pronounced Brey-gan) is the first independent brewpub in Iceland. Since they are located by the old harbor, the first word in their name translates to wharf or pier. We were at the brewhouse by the pier. 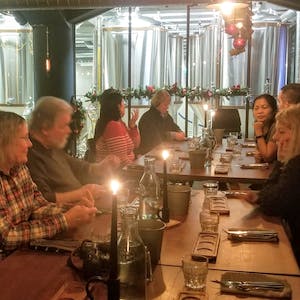 We enjoyed a fun six-course beer and food tasting experience that showcased both locally sourced Icelandic seafood and meats that are native to the area. 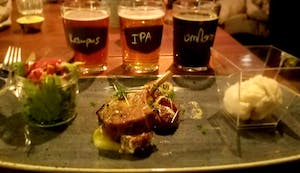 After tasting all of those pairings, we enjoyed having a brisk walk over to Röntgen – a craft beer bar that had opened just a few days before we arrived.

There we met up with Gudjon Gudmundsson, the Icelandic head of Einstök Ölgerð (Iceland’s #1 craft beer company) and Viking (the best selling Icelandic beer). 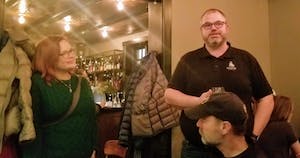 Over samples of three great Einstök beers, we learned more about Gudjon and his role in promoting craft beer in Iceland. He was the producer for the BjorFestival – the first-ever Maine Beer Box event – that brought beer and staff from 40 different Maine breweries to Reykjavik in June of 2017.

Thanks to his efforts to get the Maine Beer Box to Iceland, many Maine breweries continue to work together with their Icelandic counterparts on an ongoing basis. This has been evident as we continue to find stickers, display bottles, and many other signs from Maine breweries scattered around Iceland.

We have also learned about one particular relationship that will see Iceland brewers coming frequently to Portland over the coming months to brew with their American friends. 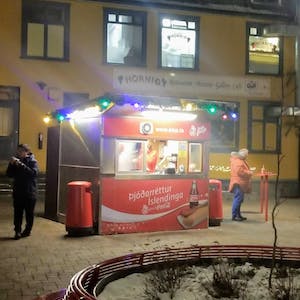 The activities were far from over. After some Icelandic hot dogs at the famous Bæjarins Beztu Pylsur (which translates to “the best hot dogs in town”), we prepared to set off to chase something very elusive in Iceland. 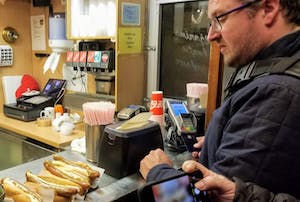 The bright lights of the aurora are actually collisions between electrically charged particles from the sun that enter the earth’s atmosphere. The lights are seen on clear evenings above the magnetic poles of the northern and southern hemispheres. They are known as ‘Aurora borealis’ in the north and ‘Aurora australis’ in the south. Often we just call them the Northern lights.

The elements for success were all there for us: Iceland’s Northern latitude, a fairly clear night, very little light pollution, and an expert aurora-chasing driver along with an Icelandic beer guide.

Needless to say, thanks to all of these factors we had great success is finding and capturing spectacular images of the Northern Lights. The pictures shown here are courtesy of
Friðþjófur Johnson, our guide. See more of his work here.

We toasted our accomplishments with a wonderful Imperial Stout that our Icelandic beer expert Stefan shared from Malbygg Brewery. Then back to the hotel for a short night’s rest. Another incredible day awaits us tomorrow with a start before daybreak. 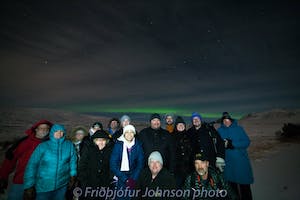 Ready to learn more about our next international adventure? Sign up for information about our next Group Trip – Insiders Experience: Ireland in March!

Don Littlefield is the General Manager of Brew Bus Tours. This is his second visit to Iceland. He closed last night (this morning?) out with a Tuborg pilsner from Denmark. Twitter @BeerinME