Our Insiders Experience: Iceland trip with Longer Vacations is underway. 13 travelers from all over the United States have arrived in the country that is famous for tremendous geological features, warm and friendly people, and even craft beer! Learn more about the first day of their journey.

After our intrepid travelers got off their overnight flights and assembled all together, we felt like it was time for breakfast. Our coach driver Havar brought us to a place called Viking World, which did not look exactly open at our 7 AM arrival time.

But they indeed were open just for us, and inside we enjoyed a full spread of Icelandic breakfast treats that were a welcome reward from the journey.

We dined under the Viking Ship Íslendingur (the Icelander). Built in 1996, the Icelander is an exact replica of the famous Gokstad ship, a remarkable archaeological find of an almost completely intact Viking ship, excavated in Norway in 1882. 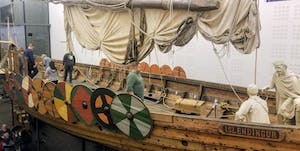 It was incredible to learn that the replica itself journeyed across the Atlantic Ocean over a three month period in 2000 to commemorate the millennial anniversary of Leif Eriksson’s voyage to Vinland.

After that, it was time to unwind in the Blue Lagoon, the most popular tourist attraction in all of Iceland. The water is a byproduct of a nearby geothermal power plant where superheated water is vented from the ground near a lava flow and used to run turbines that generate electricity.

The result is a large man-made body of salty seawater with high silica content that gives it a milky look. Over the years it has helped people with different skin conditions, and now nearly 1.5 million visitors stop by this special place annually.

We enjoyed our time there, which happened to fall before daybreak and during a pretty strong snow squall. Being in 100-degree water with snowflakes falling all around our group was an incredible experience for all. 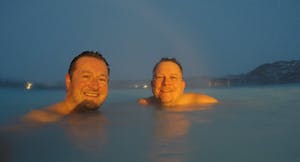 Newly rejuvenated, we headed out for a scenic tour of the Reykjanes Peninsula. At first look, the landscape at the peninsula is rough and a bit alien looking. There isn’t all that much grass, there are great lava fields covered in moss and snow.

This area is located between two continents, the North American and the Eurasian plates. As a result of the energy formed by this junction, evidence of past volcanic activity is very visible.

By the sea, there are many places with amazing rock formations, most of them very dark grey. They were particularly spectacular as the wind was blowing and the sea repeatedly hammered upon the rocks, wave after wave.

There was so much to see all around, many examples of geothermal energy, lava fields, and the rugged coastline were all stops along the way. There are old craters, fissures, and bubbling, geothermal mud pools.

Then it was on to Reykjavik and our very first visit to an Icelandic brewery.

Sigurdur “Siggi” Snorrason opened RVK Brewing Company on March 1, 2017. That day is very important in Iceland, as it represents the actual day in 1989 that ended the country’s 74-year prohibition of beer. It is now celebrated as Bjórdagurinn – the Icelandic Beer Day.

We were welcomed with RVK’s Christmas IPA beer, Eitthvað Fallegt. They have fun with this one, by “decorating” the beer with some favorite parts of the holiday, including mandarin orange, cookies, and an entire Christmas Tree!

A tour of the brewhouse followed, led by Valgeir Valgeirsson who is the brewmaster at RVK. He reviewed the method used to make beer, and the group enjoyed a taste of a beer from the brite tank that was to be kegged that afternoon. 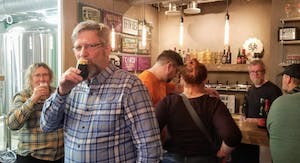 As we filtered back into the tasting room, we enjoyed a sample of a blueberry and lime skyr sour beer called Bláberja Leikir (Blueberry Games).

Many more samples along with RVK Brewing t-shirts to wear back home were purchased, and then we were all brought back to our hotel for the night.

On our own now, we pushed on as small groups through our near exhaustion to venture into the Reykjavik night. All were mindful that there many more days of stunning Icelandic exploration ahead.

Wish you were on our international adventure? Reserve your spot now for our next Group Trip – Insiders Experience: Ireland in March!

Don Littlefield is the General Manager of Brew Bus Tours. This is his second visit to Iceland. At last call on the previous evening, he had a pint at Lebowski Bar just before dreaming about writing this post. Twitter @BeerinME