Our Insiders Experience: Iceland group trip with Longer Vacations is coming towards a close. But we cannot leave without visiting the Golden Circle to observe some truly amazing geological features. In today’s post, find out more about what they saw.

The group was up early for breakfast and ready to go for a 9:30 am departure by coach bus.

With limited available daylight – and 300 km of distance to cover – we had to leave well before daybreak in order to view the destinations in the light.

The Golden Circle is the most visited area in Iceland and there are many good reasons for it. In one full day in the Southwestern part of Iceland, we were set to visit waterfalls, geysers and a National Park to view the site of the oldest Parliament in the World and once again walk between two continents.

Our first stop was at Þingvellir (Thingvellir) National Park, a UNESCO World Heritage site. Þingvellir is very close to Þingvallavatn, the largest natural lake of Iceland.

On this site, the national parliament of Iceland (called the Alþingi) met in sessions from the year 930 until 1798.

We observed the ara from a high platform and then walked between the North American and Eurasian continental plates to other parts of the park.

The Öxarárfoss waterfall was very impressive as parts of it were covered with ice. A stop near a bridge allowed us to walk to Þingvallabær, the lightly-used designated summer residence for Iceland’s Prime Minister.

After that exploration, it was time to enjoy lunch among 5,000 indoor tomato plants!

The farm at Friðheimar grows four different varieties of tomatoes under artificial lighting in greenhouses all year round, even with Iceland’s long and dark winters.

A delicious lunch of tomato soup and freshly baked bread was paired with two different beers brewed for the farm with green tomatoes and fully ripe red tomatoes. 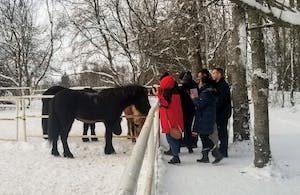 Adjacent to the greenhouses were some Icelandic horses enjoying some treats. These horses, much smaller than their more familiar cousins, were specially bred in Iceland for surefooted functions such as sheep herding and crossing difficult terrain.

We were back on the road with our next destinations of the Geysir Geothermal Area and Strokkur – Iceland’s most visited active geyser. Strokkur erupts boiling water to heights of over 100 feet regularly every five to ten minutes.

As we walked along the geothermic pools, we could see one small eruption in the distance. Shortly after we got into position – and before the cameras were truly ready – off it went again. 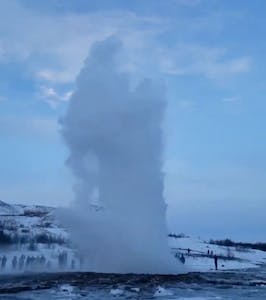 Finally ready to go, we were able to observe and capture the natural phenomenon. We hustled through the biting wind back to the bus and the final feature that we were visiting on the Golden Circle.

The world-famous Gullfoss (the Golden Falls) is a waterfall in the Hvitá River. It has two falls, with the longest drop is nearly 70 feet.

We were able to observe from a safe area high above the water, but the strong wind chilled the group and propelled icy pellets from the spray into our faces as we tried to capture pictures.

Given the conditions, we spent less time there than planned. So we set off for an important stop on the way back to Reykjavik.

Ölvisholt is Iceland’s first farmhouse brewery, founded in 2007 by two neighboring farmers who had a true passion for beer. 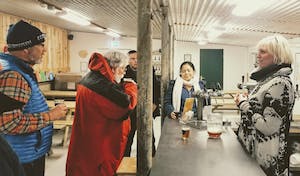 ​Our host provided us pours of Skjálfti, a California Common beer. She then explained that the owners repurposed an old cattle barn was to house the small brewery.

In the twelve years since they have opened, Ölvisholt has developed a reputation for making creative beers that are well-received for their variety and quality. 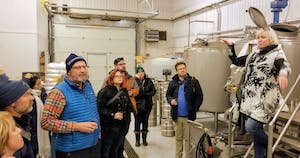 A walk around the production spaces provided us all the opportunity to enjoy the very first samples this year of the 24th, a 10% ABV English Barleywine. 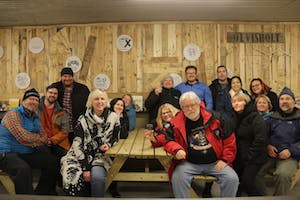 Back in the taproom, a couple of additional samples were enjoyed before we said farewell and headed back to Reykjavik.

Our last night in the city was designed in the itinerary to give us all an opportunity to find our own dinner adventures.

And as one would expect after so much time together as a group, we all literally ended up in the same spot for food and beer.

[Read the series of reports from Iceland]

Ready to learn more about our next international adventure? Sign up for information about our next Group Trip – Insiders Experience: Ireland in March!

Don Littlefield is the General Manager of Brew Bus Tours. This is his second visit to Iceland. He last enjoyed a Tuborg Julebryg (Christmas Dark Lager) before leaving the wonderful country of Iceland. Twitter @BeerinME