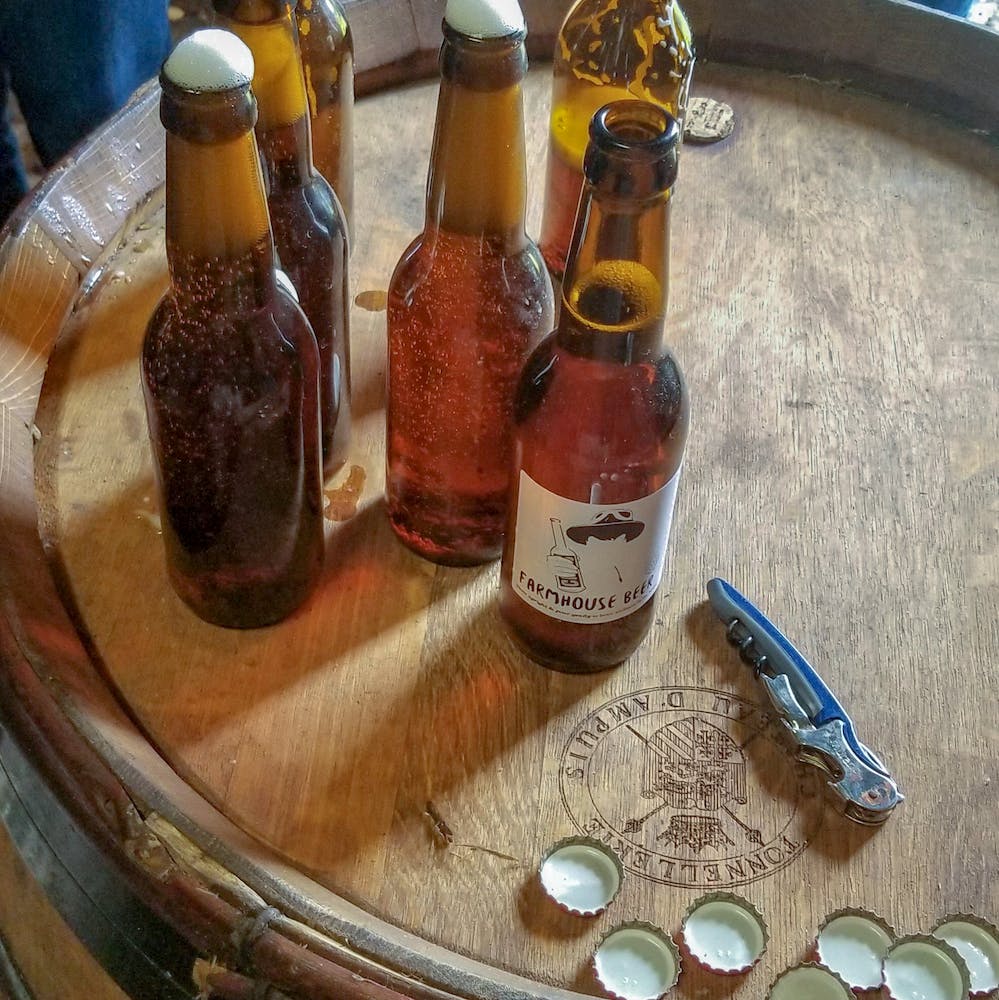 Setting out bright and early after our first day and night in Ireland, our group of Insider Experience: Ireland travelers headed out of Portlaoise and towards the west coast of the country. Here is the report about their incredible adventures along the way.

A long night for some and an early rise for all really didn’t allow for much sleeping time. But the rewards included a traditional Irish breakfast served buffet-style and happy thoughts as we boarded our “Irish Brew Bus” for a journey to County Tipperary.

Joining us on the bus once again was Mark “Twig” Twohig from CANVAS Brewery. As we traveled towards the place he called his personal nirvana, he regaled us with his personal life history and journey to date.

His talk was rambling and multi-layered – at times irreverent and very hilarious – but eventually, the key tenets of his beliefs and the direction of the brewery came into focus.

He describes himself as a teacher, thinker, farmer, and brewer. But it hasn’t taken long to figure out that he also has a certain spiritualism about how he conducts himself.

This was clearly evident over the course of the day as he led the group through a few meditation and reflection exercises. Attempting to connect with nature and disconnect from the pressures and chaos of the real world also helps to describe the ethos of the brewery called CANVAS.

Twig started the group in the barrel room, which also doubles as the entrance hall.

Located on a farm that previously was a key producer of malting barley for that well-known massive stout producer in Dublin, CANVAS Brewery has four founders representing two sets of brewing brothers.

The name of the brewery comes as it represents a canvas of concepts that they are passionate about. Twig brings his beliefs about food and flavor,  Maurice Deasy is a farmer who designed the wood-fired kettle, Dave Twohig and Michael Deasy both contribute art, design and marketing skills to the effort.

Heading down a path towards the former mill on the farm.

The whole idea of starting a brewery started innocently enough nearly eight years ago with a handful of questions.

Why not use the rich resources of the fertile land to transition from feed-grade barley back to brewing-grade? Can the water found on the farm be used to find a sustainable (and fish-friendly) way to power the farm and the brewery? Any chance that the “hops” that the sons of the landowners had heard about in their youth could be revitalized and used for brewing?

Observing the operation of the Archimedes Screw that powers the entire farm and brewery.

Could dairy and other farm equipment by repurposed into a functioning brewing system? And also, could that be not gas-fired, steam jacketed, or electric powered, but instead heated by use of hand-split wood in a hand-made boiler setup affectionately called “Mad Max”?

CANVAS is all that, and much more. The former car barn has been made into a working brewery, using the strengths of the property and the land as assets rather than as obstacles.

Twig hops onto a stump to descrbe the wood-fired boiler called “Mad Max”.

Entering first into an impressive barrel room, our group was easily able to absorb right away that this brewery that was licensed only in 2018 was veering very far away from the Irish “Holy Trinity” of Red Ales, Lagers, and Stouts.

In the cramped brewing space, Hugo took time away from watching today’s brew to talk more about the connection between the forest, the land, and the brewery. This wasn’t an act, this is how everybody involved in CANVAS truly feels.

Hugo has a little time to talk to our group as he waits for the water to heat enough for brewing.

A walk along a path led past horse stables and outbuildings, down to a hop planting in a small area, then to the former grain mill building for a couple of tastes of CANVAS beer, and along the river to see the barley planting areas, and finally find some modern technology…an Archimedes screw.

This was engineered by one of the brothers, and is the sole source of power for the farm, and is designed to allow fish to pass through without harm.

In the old mill building, Twig brought out some special beers for us all to try.

This traipse along the muddy paths made the group hungry – thirsty, and we soon made our way back to the barrel room for much more beer, and a scratch-made lunch prepared just for us. A delicious stew featured venison meat that had been procured by Hugo, who is also a hunter. Farm dug carrots, onions, and potatoes added to the mix. Served alongside were generous slices of buttermilk soda bread, and both a creamy soft camembert and a delicious aged hard cheese.

Great beers, delicious food, warm people, stunning hospitality, and all in a beautiful setting really made this stop very special.

Reluctantly we said our goodbyes to Twig and Tilli, and boarded the bus for the trip towards the west and the Wild Atlantic Way.

A stop was planned in Lisdoonvarna, and we entered the Burren Smokehouse – a place I had personally visited five years ago this month.

Birgitta Curtin is a native of Sweden who found her way to live in Ireland and opened the smokehouse operations in 1989. They smoke locally-sourced wild Atlantic salmon in two ways, a cold-smoke method which is very traditional to Ireland, as well as a hot-smoke method more familiar to Scandinavian countries…such as Sweden.

Her husband Peter Curtin is a native of the very local area. He was born in the building just down the street, the one that houses The Roadside Pub. Once a pub with a bakery attached, the building now also houses a brewery producing some legendary Irish styles alongside a beer that is made without hops.

Peter Curtin tells many stories about his beer at The Roadside Tavern.

From the style called Gruit (from the German word Grut meaning herb), these are beers without hops. True to style, the Euphoria beer uses herbs, roots, and spices for bittering. It also features a locally-sourced wild yeast strain that came from the “Hill of the Faries” just a few miles from the pub.

Peter gave a rollicking “presentation” about his various beers, giving anecdotes about his craft beer styles and how they have been received by people around the world who have found their way into the classic Irish pub. Our group enjoyed tasting the different beers, before getting back on the bus to visit the legendary Cliffs of Moher.

Rising as much as 700 feet above the Atlantic Ocean, these sheer cliffs were produced by retreating glaciers carving through the sandstone and creating this geographic feature – but also the area called The Burren. Over 1.5 million people a year visit the Cliffs of Moher, and everyone enjoyed the visit there.

We had a chance to see this stunning site under a light rain, which made the experience “much better” than seeing it in clear sunny conditions. At least that is what our driver Seamus told us.

Off towards Limerick, the third most populated city in the Republic of Ireland. This would serve as our home for the night…once we all found a bite to eat, a pint or two (or three), and some traditional Irish music and dancing.

We needed another night of rest, as in the morning we are off to Dingle Town and the Slea Head Drive..of course with a couple of special stops along the way. [Read the Day Three report here]

Don Littlefield is the General Manager of Brew Bus Tours. This is his third visit to Ireland. He enjoyed three pints of Murphy’s Irish Stout at Locke Bar just before dreaming about writing this post. Twitter @BeerinME