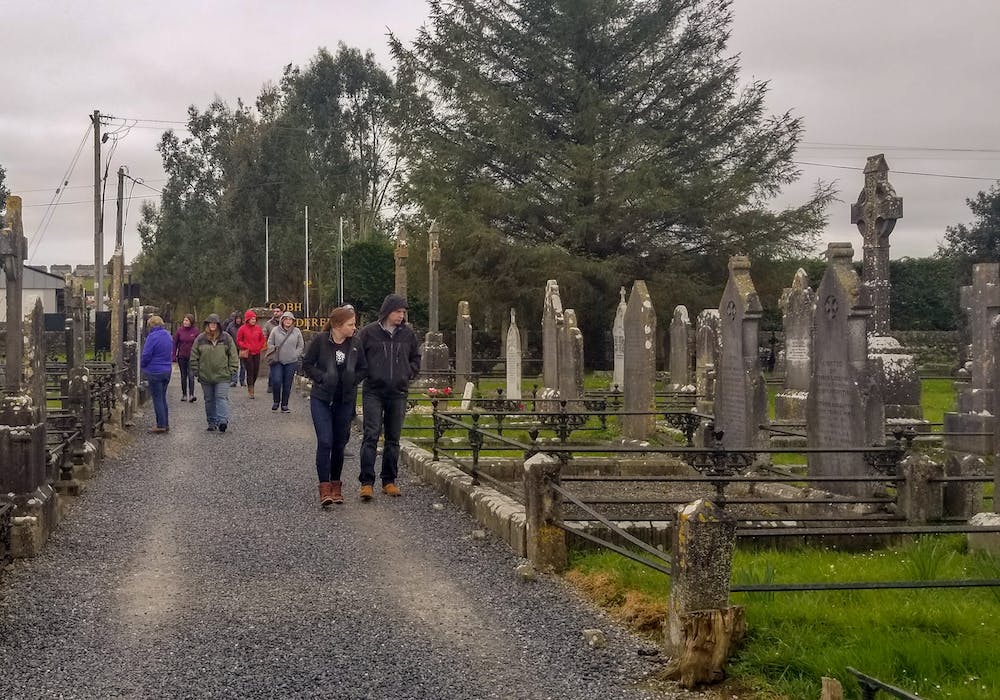 The pace has slowed down just a little on our Insider Experience: Ireland group trip. There is a second night of lodging planned in Cork so that we can check out a small but important town, a medium-sized brewery, and have time to visit some of the pubs that might have been a little too busy the night before. Here is the report from Day Five on the trip.

This scheduling allowed the group to have a day trip down to the coastal town of Cobh, Ireland. Pronounced like the English word cove, Cobh has played a huge role throughout Irish history. This is the area that saw thousands of Irish depart their homeland with emigration to other countries for various reasons. It also is a town that is associated with two major maritime disasters.

Before we got into the town, we visited a cemetery with a memorial to the many of the victims of the RMS Lusitania that were buried there. In 1915, the Cunard passenger liner was sunk off the coast of Kinsale by a German submarine, and this action led to the United States of America joining World War I.

We briefly stopped by St. Colman’s Cathedral while a mass was underway. One of the tallest buildings in Ireland, this massive church sits on a high point overlooking the harbor.

Construction was started in 1868, but due to changes and inflating costs it was not completed and consecrated until 1919. In the tower is a 49 bell carillon which is one of the largest in Europe.

Its protected harbor has seen shipbuilding operations since the 1800s, and it served as a naval base during World War I. It served as a major embarkation port for prisoners who were deported to penal colonies as far away as Australia, and also was the departure point for 2.5 million Irish men, women, and children who emigrated to North America beginning with the Famine Years of 1844-1849 and continuing for another century.

This town was also the last port of call on the fateful maiden voyage of RMS Titanic. Three days after leaving Cobh harbor, the White Star passenger liner hit an iceberg 375 miles south of Newfoundland and subsequently sank killing more than 1,500 people.

The bus stopped for a couple of hours allowing the group to walk the town, visit the former White Star Lines offices for the Titanic Experience Cobh, or walk through the former train station to check out the Cobh Heritage Center.

The group then came back to Cork City to learn about an Irish craft brewery that now has two decades of experience behind them.

We were greeted warmly by Kate Clancy, Marketing Manager for Franciscan Well Brewery.

The bar at Franciscan Well Brewery in Cork, Ireland.

She told us how the company was founded by Shane Long in 1998 as a small brewpub located on the site of a 13th-century Franciscan monastery and water well. Over the past 20 years of operation, it has become Ireland’s largest craft brewery.

Kate tasted the group on several Franciscan Well beers and used the aroma and flavor wheels behind her to help train our group.

Their beers are produced at the brewpub site we visited and also at a large production brewery just a few miles away. The Franciscan Well beers can be found in Ireland and in the UK, but not in America. At least not yet.

It was also noted that in 2012 they partnered with Jameson Whiskey to produce a limited edition Whiskey-Aged Stout, the first collaborative product in what is now the popular Jameson Caskmates line of beers and whiskeys.

Their many achievements did not go unnoticed, and in 2013 Molson Coors acquired the Franciscan Well brewery for an undisclosed sum. They are left on their own to run independently and are looking for new ways to expand their brand outside of Ireland.

Evan studies an artifact: a bottle of Franciscan Well water dating to well before the brewery opened.

After tastes of their core beer lineup, the group went to the outside area to order more beer (and pizza) if they wished. Kate opened up the small brewhouse, and a handful of people at a time took a brief look around the small but functional space.

The Bierhaus is an excellent craft beer bar along the river in Cork.

The rest of the afternoon and evening was “on your own”. Some folks went shopping downtown, and others went to nap. Others went in search of food and more beer – which was successfully found at The Bierhaus, Abbots Ale House, White Rabbit, and Rising Sons Brewery.

The next day would see us heading to Dublin for the finale of our amazing trip. But not without visiting the homes of the two largest alcohol brands in the country: Jameson and Guinness. [Read the Day Six report here]

Don Littlefield is the General Manager of Brew Bus Tours. This is his third visit to Ireland. He had a pint at Dan Lowery’s Tavern just before dreaming about writing this post. Twitter @BeerinME